Many people ask me the question, “does Shakeology give you energy?“

And my answer to that question is, “yes”.

But is it important to understand how Shakeology gives people energy.

Shakeology gives people energy in a natural way. Shakeology is not a stimulant and it isn’t supposed to give you a surge of energy the way a cup of coffee, a Red Bull, or a 5 Hour Energy would. The “energy” that one gets from a cup of coffee or an energy drink is the caffeine at work. Caffeine is actually considered a drug, and it shares a number of traits with the more harmful drugs amphetamines, cocaine, and heroin. Obviously caffeine is not as dangerous as those drugs that I mentioned, and some studies show that caffeine actually has some health benefits. 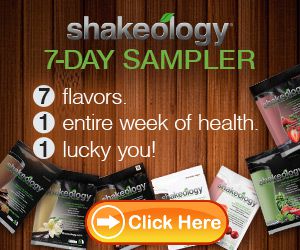 I’m not knocking caffeine or coffee, I drink 1 or 2 cups a day myself. The point I want to make is that the energy you get from Shakeology is not the same as the spurt of energy you get from a cup of coffee. Typically the caffeine “high” will wear off after a couple of hours whereas the energy one gets from Shakeology will last throughout the day. Many people “crash” sometime in the afternoon a few hours after lunch. This crash may be cause because the caffeine is wearing off. With Shakeology, that “crash” is eliminated and you feel energetic all day long. Read the testimonial below from just on of our happy customers:

“Shakeology has really changed my life in more ways than one. I didn’t have a lot of weight to lose—just about 10 pounds. I had been exercising on a regular basis but was still having trouble losing those last few pounds. So I started to drink a glass of Shakeology once a day. I noticed within the first week that my energy level had soared! I couldn’t believe how much better I felt. I was also sleeping better at night and didn’t need that second cup of coffee later in the morning to get me through the day. Getting up at 4:30 every morning to work out was easier too. I attribute that to getting a better night’s sleep, as this has been a chronic problem with me for a long time.” -Patrica L. 48, Staples Minnesota

So How Does Shakeology Work?

There are several ingredients in Shakeology that will give you energy. I’ve listed them below as well as how they specifically work:

So in the regular language, what does the green tree extract do and how does it work?

A recent study showed that green tea supplements increased fat metabolism at rest and carbohydrate metabolism during moderate exercise. This study gave volunteers either a drink containing green tea extract or a placebo (a drink that looked just like the green tea drink). This study was double-blind, placebo controlled, which means there was very little chance of cheating or bias because neither the participants nor the scientists knew who was getting what until after all the blood samples were collected, tested and analyzed.

Shakeology also contains these B Vitamins which are known for increasing energy, among having many other benefits:

If you dig a little deeper and do further research, you’ll find that each of these B vitamins that I’ve listed above all have a handful benefits. These are just some of the ingredients that are going to provide you with a steady stream of energy through out day. You can view the entire Shakeology ingredient list at the link below:

What Doctors Are Saying About Shakeology

Beachbody does not guarantee any level of success or income from the Team Beachbody Coach Opportunity. Each Coach's income depends on his or her own efforts, diligence, and skill. See our Statement of Independent Coach Earnings located at http://tbbcoa.ch/TBB_SOICE for the most recent information on our Coaches' actual incomes.